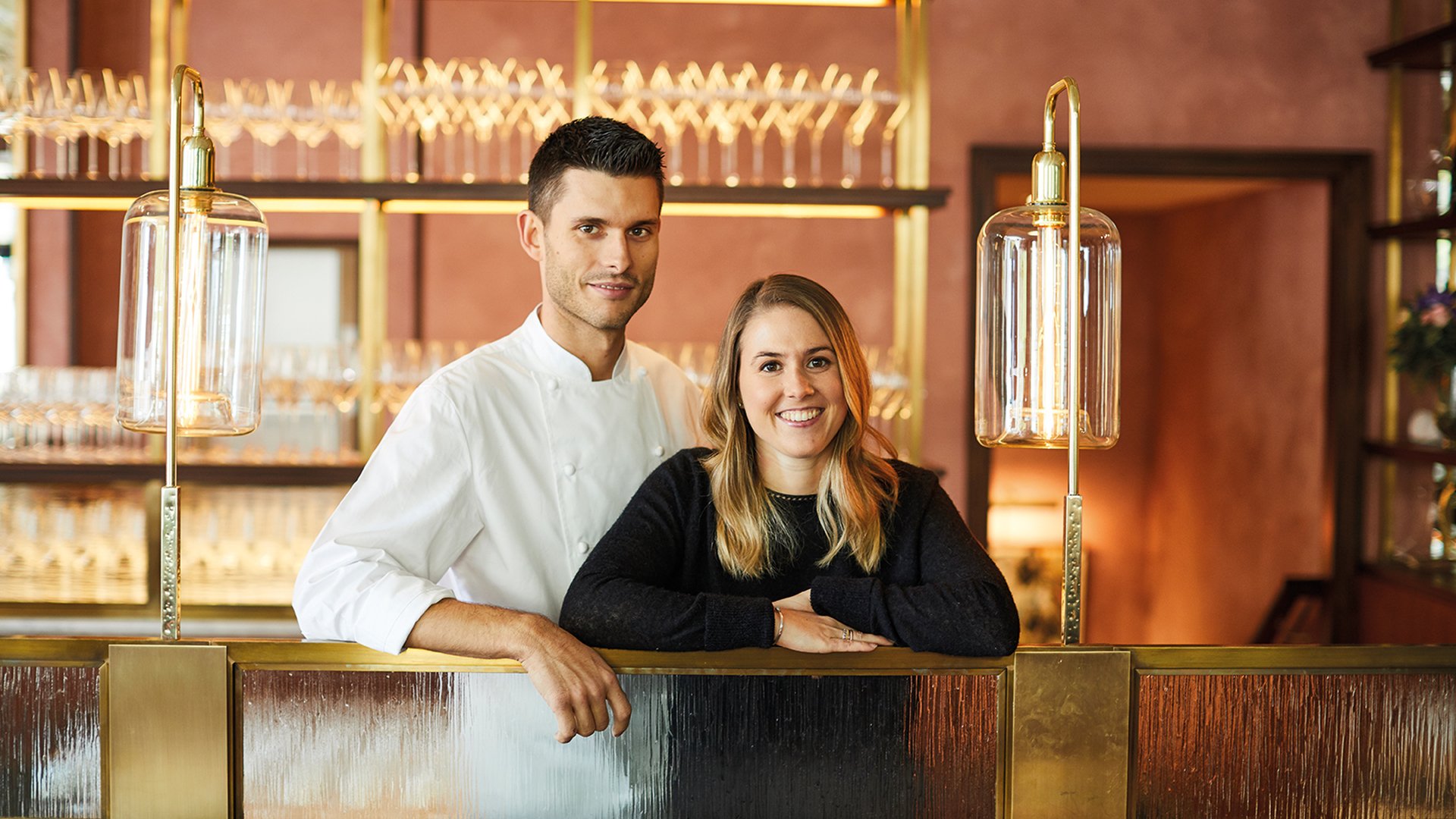 As dynasties go, the roux family is one of the most celebrated, having notched up multiple michelin stars, a clutch of award-winning restaurants and a worldwide reputation as purveyors of fine food. Now Emily – the third generation of Roux chefs in London – has launched her own venture.

Caractère opened its doors with a pledge to bring “beautiful food, warm surroundings, and expert and friendly service” to Notting Hill in West London. If the initial reviews are anything to go by, it has done just that. ‘Ms Roux cooks up a classic’ raved one, ‘extraordinarily good’ said another. It’s an auspicious start for a venue which, in translation, means ‘character’. 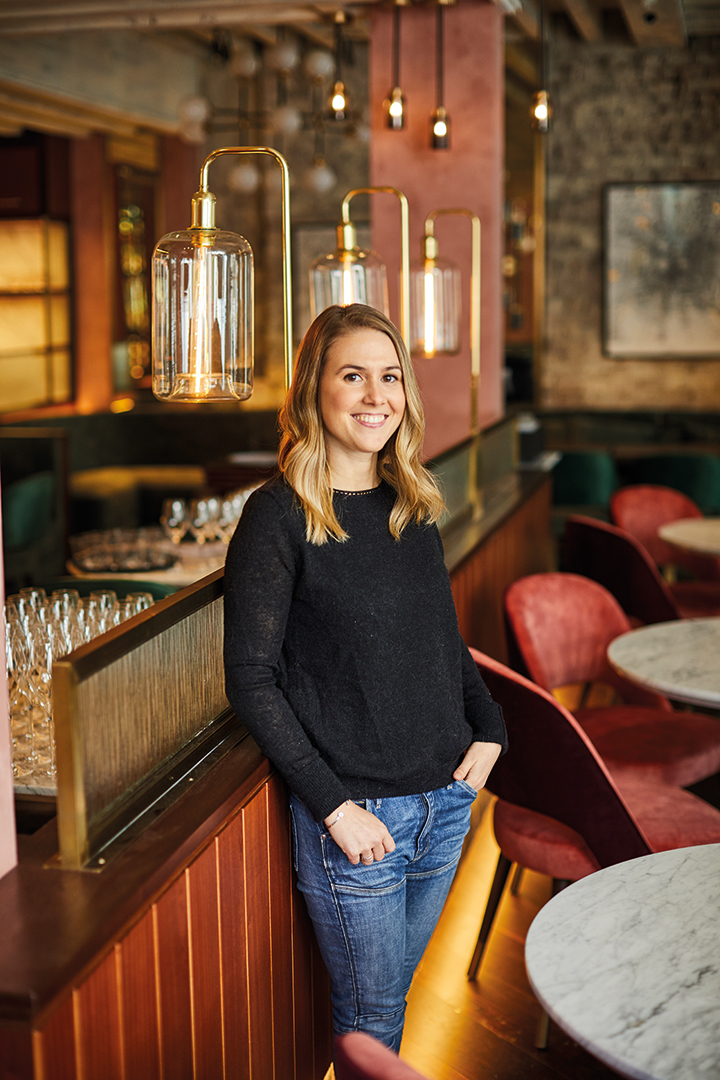 It is also a first-time collaboration for Emily and her husband Diego Ferrari, the latter of whom has spent the past three years as Head Chef at Le Gavroche in Mayfair where Emily’s father, Michel Roux Jr, is chef patron. As Emily explains, the decision to name the 60-cover restaurant ‘Caractère’ reflects the couple’s joint history.

“My husband and I are very stubborn and we’ve both got pretty strong characters. We’ve chosen Caractère in French because we speak French together and we worked in France for about ten years together, so it made sense that it was in French rather than in English.”

Born and raised in South West London, Emily spent her weekends being babysat at Le Gavroche (she has previously revealed that “they put me in the corner with kilos of tomatoes or potatoes and I’d just peel for hours on end”). But she received her culinary training at Alain Ducasse’s Louis XV in Monaco where she met Diego, 32. The pair later moved to Paris, working in different Michelin-starred restaurants, before settling in London three years ago. At Caractère, Emily is front of house while Diego is in the kitchen.

The husband and wife team live in Putney. So why open a restaurant in Notting Hill?

“I like Notting Hill, I love all the colours of the different houses and Portobello Road is unique. But it’s also an up-and-coming area for food. You’ve got Clare Smyth, you’ve got the The Ledbury, Granger & Co., Bucket – I could keep on going. There are loads of new, fun places and it’s not all about Shoreditch and Hackney now.”

Emily wants the restaurant to be friendly and casual, a “home away from home with good food”. The menu, which the young couple have worked on for months, combines their love of classic French and Italian food as well as drawing on family favourites.

“The dish that we highly recommend people try is Celeriac Cacio e Pepe. I’ve always been a massive Italian pasta freak and this is a dish that Diego’s mother and grandmother used to make and that I totally fell in love with. We tried to recreate that but without it being a rather simple pasta dish. So we use a Japanese Mandoline to do very thin slices of celeriac and then slice them into tagliatelle, and use the same sort of things you would have in a Cacio e Pepe classic Italian dish. It’s a really nice winter dish.”

Emily has been quoted as saying that Cacio e Pepe would be her “death row” meal, something she now confirms (“it would always be pasta, I don’t count carbs in any way”). But there are plenty of other mouth-watering morsels on offer at Caractère, including seared mackerel with confit beetroot, black cardamom and parsley condiment. 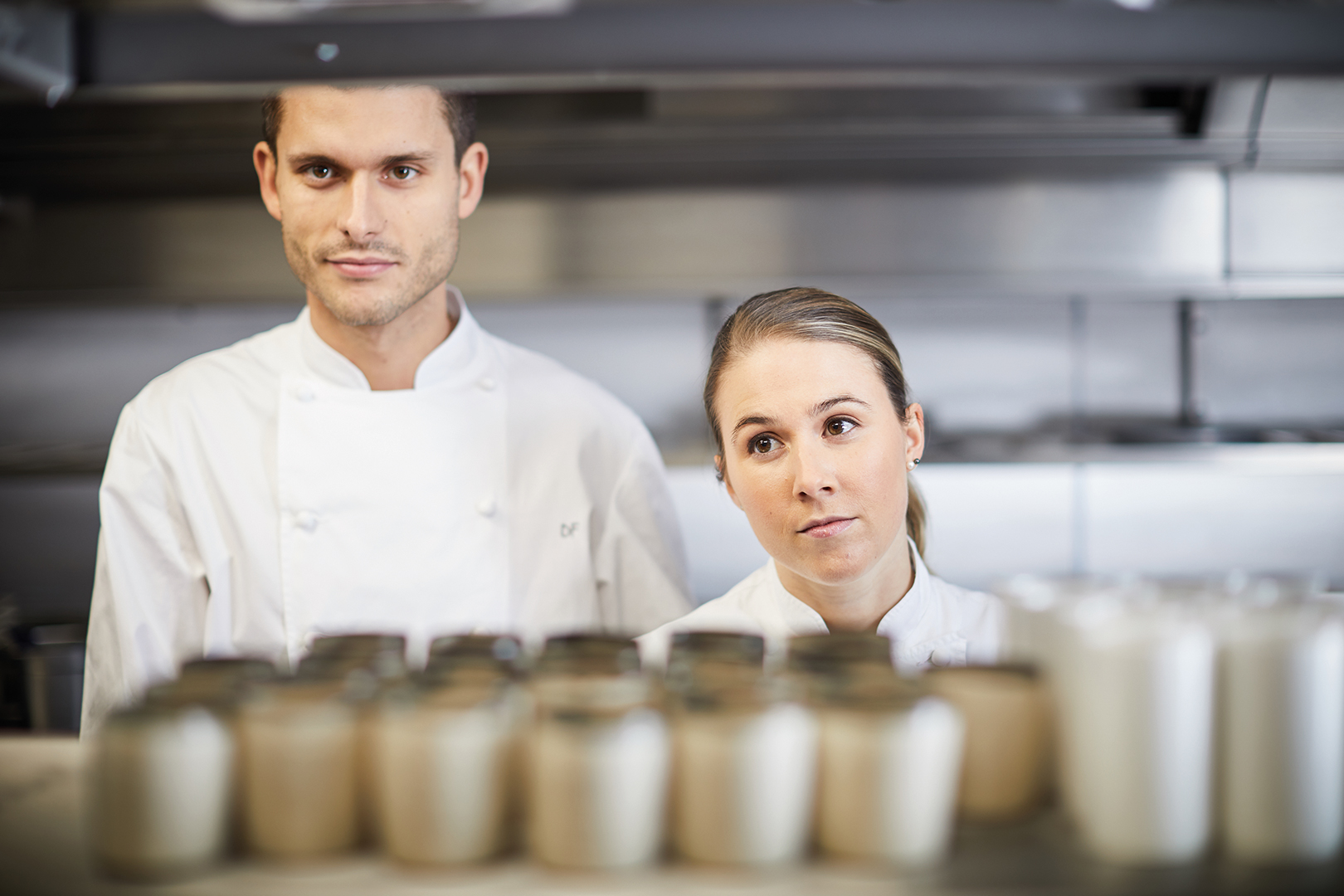 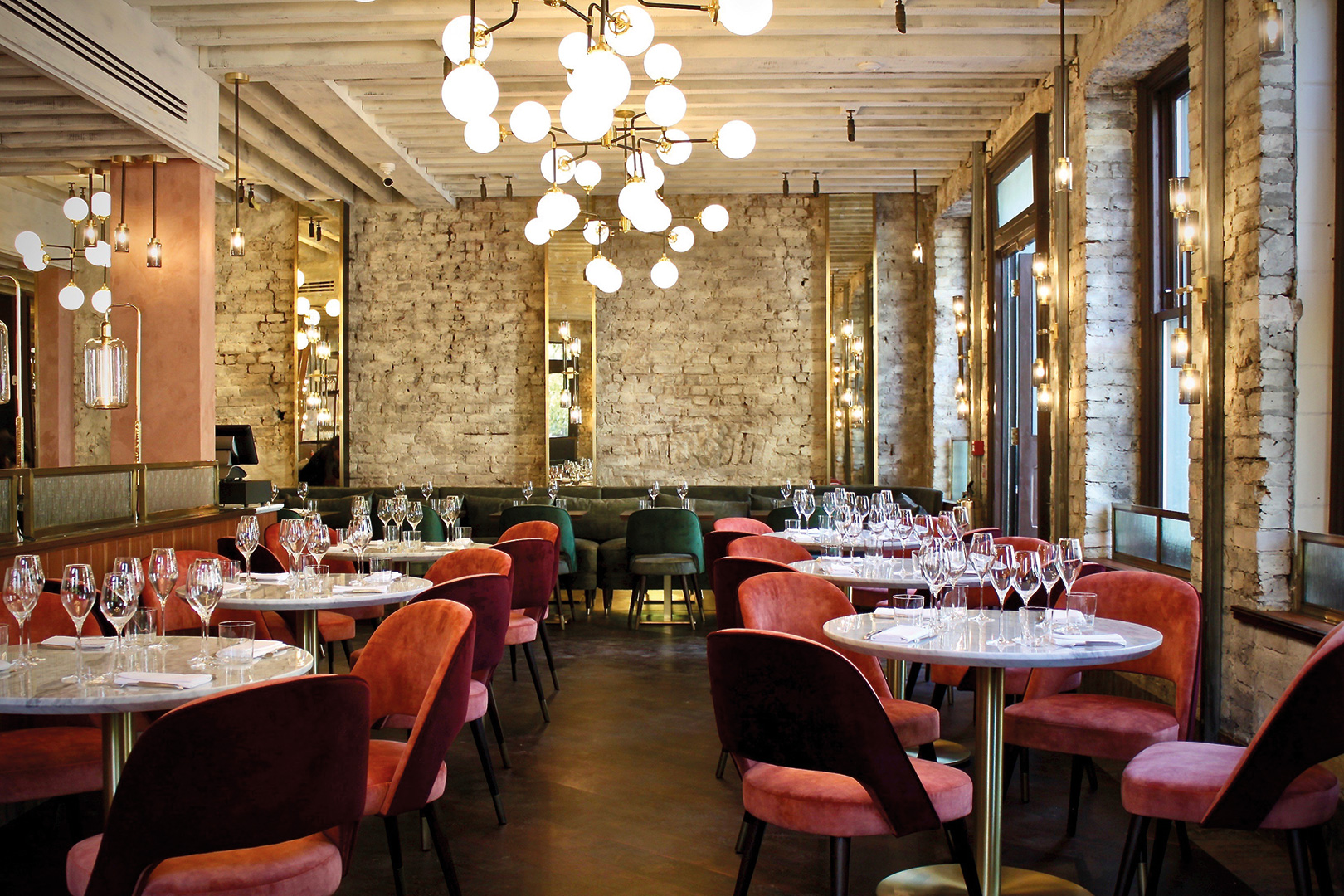 In addition, Emily and Diego are doing their bit for sustainability and their carbon footprint.

“We try to source our ingredients from Britain whenever we can. So our fishmonger is from Cornwall, we get some of our scallops from Scotland, all our veg is supplied from farmers within easy reach. The only few things we can’t get locally are speciality products. So, in the Cacio e Pepe there’s a 25-year-old Balsamic vinegar that is very special and we can’t find that in London.”

But, where the Roux family is concerned, who is the best cook?

“Oh, that’s me! No, I’m just saying that. We’re all really different in the way that we cook. So my grandfather (Albert Roux) is super, super traditional and classical and he won’t steer away from that. And then my father is less classical and really appreciates all kinds of different sorts of food. And then I’m even more different because we’ve worked in very different places.”

As for Emily’s aspirations for 2019, they’re pretty straightforward. “I just want a fully functioning restaurant with happy customers.” 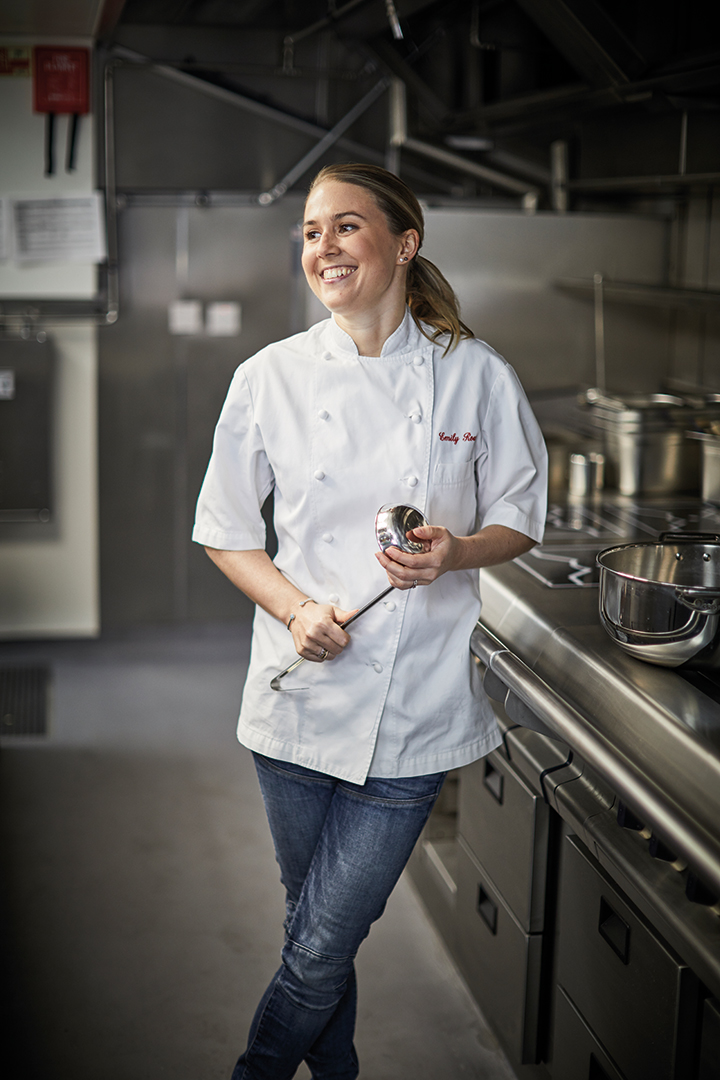 Is London the culinary capital of the world?

“I think so. It’s a mix of the choice and the quality. For example, in Paris we would eat out a lot less often because it’s probably more expensive but also there’s a lot less choice. There are very few Japanese, Oriental and Chinese restaurants that are high quality and affordable, whereas in London we have an array of different cultures and choices of restaurants that are all really great quality.”

Eating out in London

“Dining out, we’re massive foodies and eat out nearly every weekend. We’re really not fussy and we’d never complain, never say anything, half of the time it’s always really, really good food anyway. Eating out opens your mind to different possibilities and things that could and should be done.”

“For me, London is home and Diego has loved London since he first came here seven years ago and met the parents.”