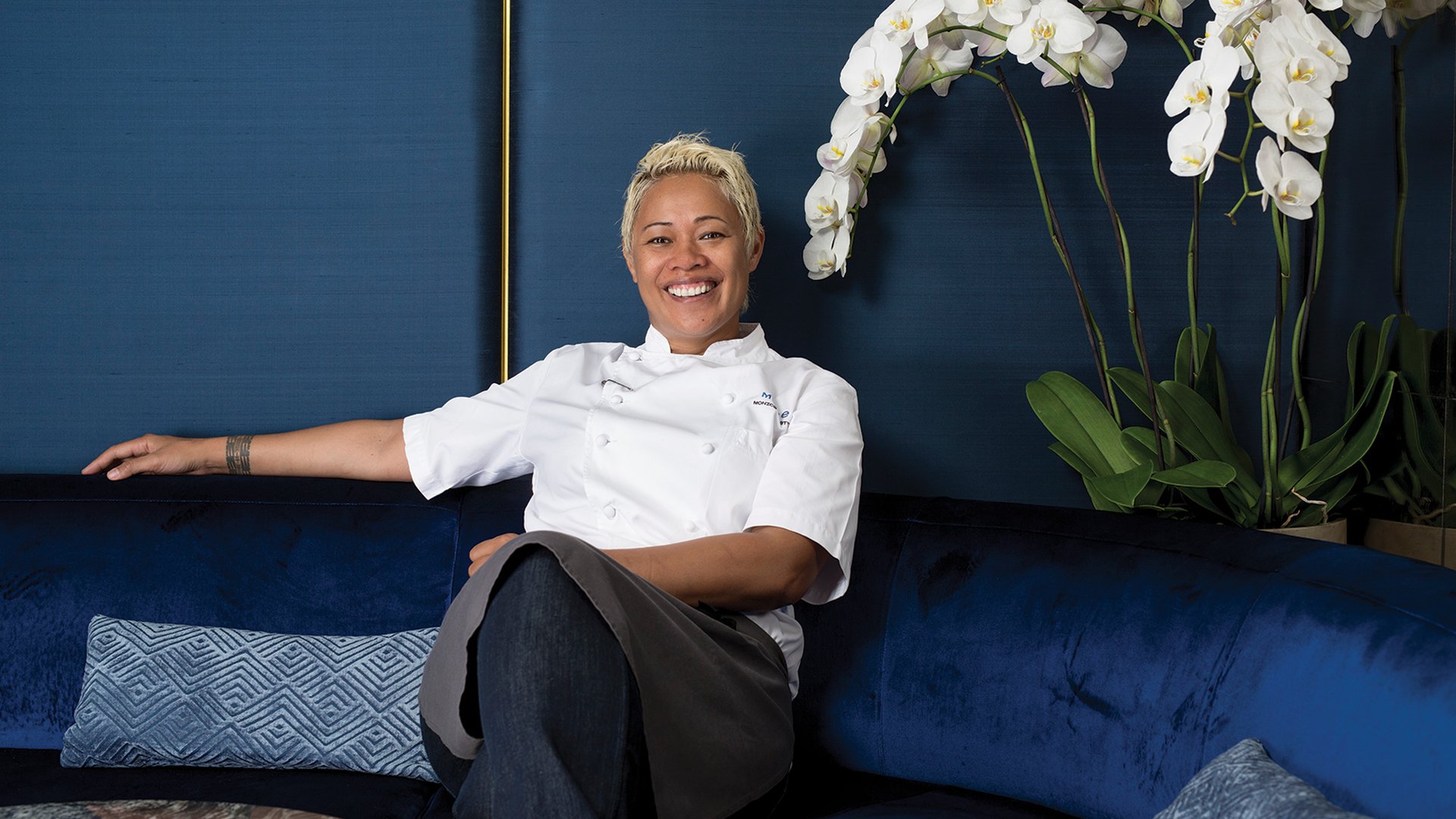 She may be hard to please as a judge on TV’s MasterChef: The Professionals, but Monica Galetti tells Dexters that her mission is to make London’s diners happy.

If someone tells you that you can’t do something and that you’re not good enough, you’ve got to prove them wrong! - Wise words from chef, broadcaster, mother and now restauranteur Monica Galetti.

She’s now also famed for presenting BBC’s Amazing Hotels with The Times restaurant critic Giles Coren – introducing viewers to such delights as Giraffe Manor in Kenya and a five-star cuboid hotel in an Ecuadorian cloud forest. But the most exciting professional achievement for the Samoan-born Kiwi is the opening of Mere with husband and fellow La Gavroche alumni David earlier this year. 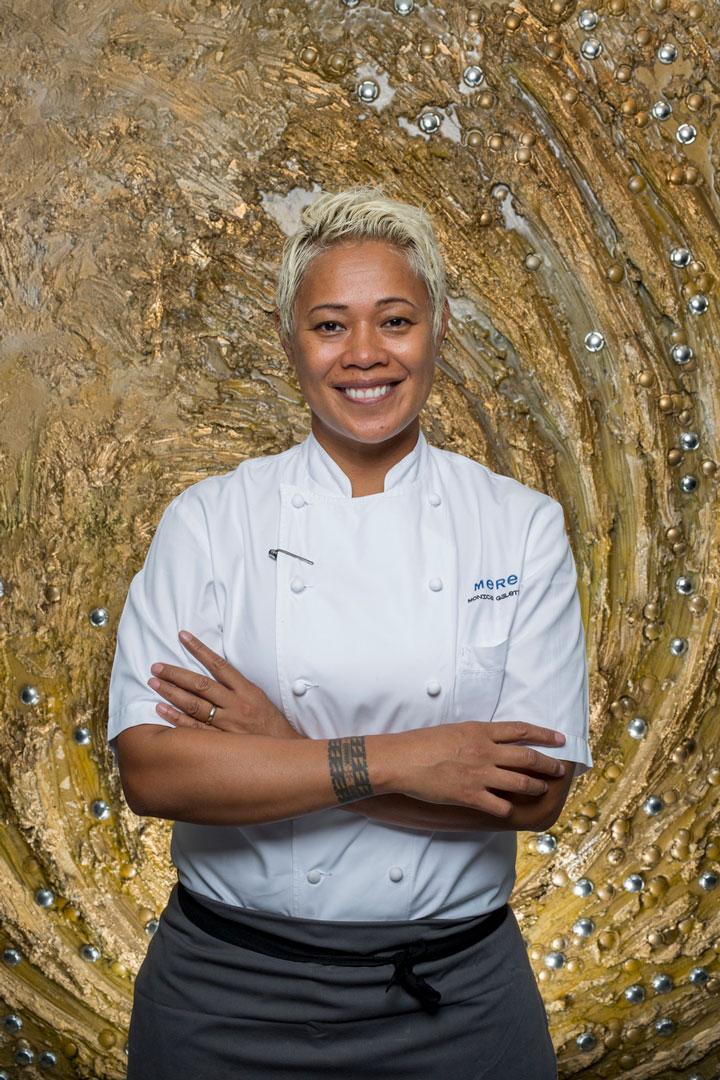 Mere is among the significant openings cementing Fitzrovia’s reputation as one of London’s culinary hotspots. Charlotte Street already boasts Pied à Terre and Roka, but the opening of Mere at the north end brings a new vibrancy and warmth to one of the capital’s most exciting destinations for gourmets.

“In the beginning people were saying we were at the wrong end of Charlotte Street, but for me that made it the right end to be. Being slightly away from the crowded part of the road is nice because people don’t expect to find us here. And our neighbours and the businesses around us have been wonderful,” Galetti told Dexters.

If her TV judge persona is at times uncompromising, as restauranteur, Galetti is focused on creating joy, “Our sole objective is to make people happy, that’s what hospitality is about. I don’t like to queue up and wait for a table; some people do. It’s about making people feel warm and welcome. I want every customer to walk through the door and feel at home, forget life for a couple of hours and let us take care of them for a little bit.”

Galetti first started cooking in New Zealand, having moved there from Western Samoa, where she was born in 1975. She applied to work in some of London’s finest kitchens before landing a role at La Gavroche under Roux Jr. Why London? “I was hungry to learn. I wanted to be successful in my career. I was and am very serious about being the best I could be, not to prove anything, but because I never want to stop improving as a chef. London was where I felt I needed to be to do that,” she says.

Roux Jr has described how he tested Galetti as she trained, saying if she couldn’t handle his kitchen, she should go back to cooking in New Zealand. Her enduring desire to prove any doubters wrong came to the fore, with Galetti toughing out his challenges to secure one of the most senior positions in Roux Jr’s impeccable kitchen.

I NEVER WANT TO STOP IMPROVING AS A CHEF. LONDON WAS WHERE I FELT I NEEDED TO BE 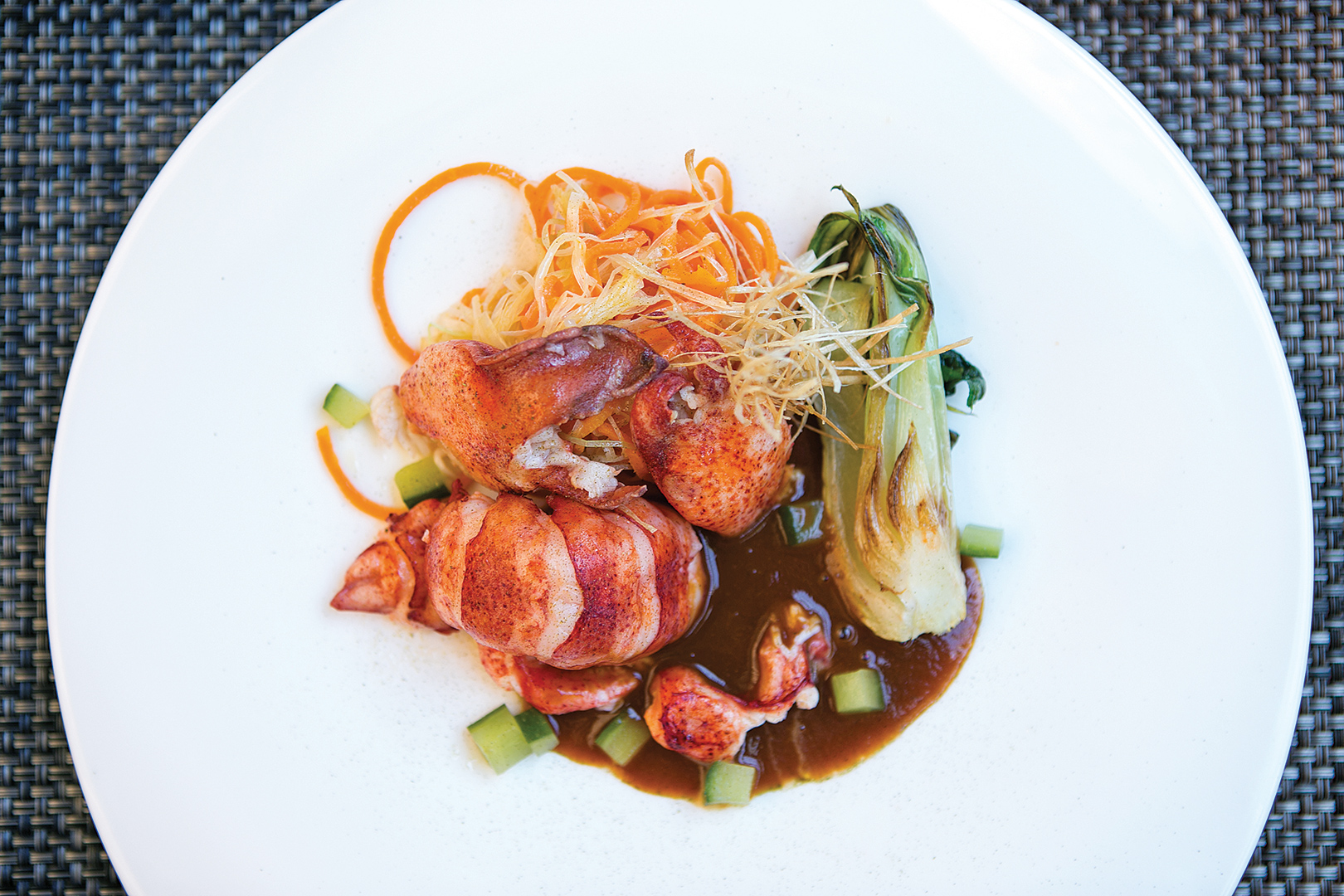 That single-mindedness showed itself again with Galetti’s departure from La Gavroche and the launch of Mere. Galetti’s Pan-Asian heritage and her classical French training under Roux Jr are also reflected in the exciting flavours and exquisite plating of dishes at Mere, “These cultural influences present themselves in various ways throughout my dishes, sometimes it’s really subtle, sometimes it’s not. For example, we used Marmite from New Zealand in our mushroom and Marmite tortellini, or dishes like the banana and coconut dessert or pork boil-up are both heavily inspired by the South Pacific. My French training comes through most strongly in the presentation of my food,” she says.

The most popular dishes among diners depend, like the menu, on the season. “When we opened it was just coming into spring and the most popular dishes then were easily the mushroom and Marmite tortellini and the banana coconut cream dessert. But in the summer, it was the passionfruit curd and kiwi pavlova. The squab pigeon and the scallops with black curry are also really popular. Oh, and the lamb, people are loving the lamb.”

As much care has been given to wine as to the food. Mere uses the Coravin system, where wine can be poured from the bottle without removing the cork, which gives guests access to ‘very special’ wines by the glass or in a carafe. Mere’s cocktails are also a source of pride, “There’s a new one which I personally love called Sharkey, named after our barman Laurent whose last name is Rokan, which means shark. It’s also a tribute to his uncle who’s a good friend of ours and loves Champagne,” says Galetti. 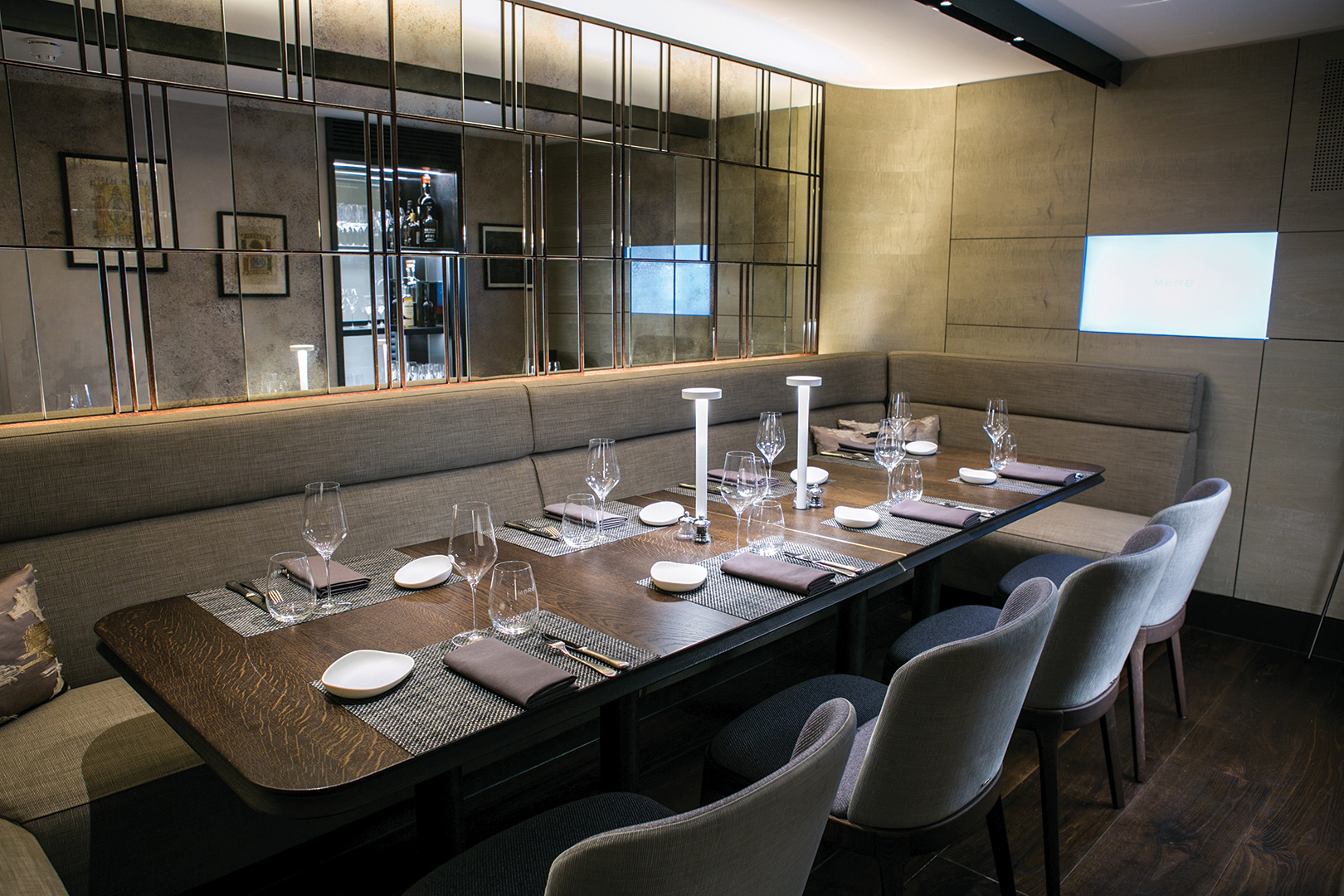 Galetti shares the joy of food and wine in discussing Mere, but she also invokes the no-nonsense style TV viewers will likely recognise, “We’ve watched trends come and go, things like using liquid nitrogen and dry ice. That’s all fun, but I like to stick to what I know. I enjoy trying and adapting modern techniques, but I don’t necessarily need to do everything under the sun to prove myself as a chef.”

With Mere, it seems as Galetti has completed her transformation from young pretender to doyenne of the capital’s fine dining elite. Once quoted in a newspaper, "When I was growing up, the Roux brothers, Michel's father and uncle, Albert and Michel Sr, they were my idols.” How does it now feel to be an idol to the next generation hoping to make an impression on London’s high-end dining establishments? “It’s odd, knowing young chefs are now looking up to me. It makes me feel old [laughs], which I don’t like, but I don’t see myself as someone who needs to be looked up to! My advice to younger chefs is to get themselves into a good kitchen, learn as much as possible and to enjoy cooking, despite the pressures that come with the job. I run a kitchen, which is tough for sure, but we’re always laughing and the majority of the time we’re having a great time. I think it’s really important for young chefs to get themselves into a kitchen where it’s all about the team, not just the chef who runs the kitchen.”

It’s a characteristically warm and generous take, one you’ll find reflected in the cuisine and ambience of Mere, and doubtless in Galetti’s future ventures.

MONICA AT A GLANCE

Where do you love to eat and drink on a rare moment off?

I like to try and catch up with new restaurants and see what my friends are doing. I recently went to Claude Bossi’s restaurant Bibendum which was superb. And I’m desperate to get to Core by Clare Smyth soon.

What’s the thing you miss most when you’re away from London and what’s the first thing you do when you are back in town?

The thing I miss most is my daughter, and my dog! The first thing I do when I get back to London is head to the restaurant and check on the team, I actually miss the restaurant when I’m away.

You met your husband David when you were both working at La Gavroche, but where’s the most romantic place in London now?

You’re bringing up your daughter in the capital – what’s the thing you most enjoy doing together as a family in London?

We love going to the theatre, and she loves dining out with the two of us, needless to say. We’re heading somewhere special for my birthday this year. If you give my daughter the choice of going to a restaurant or seeing a friend she’d rather eat out with us. After food, we would probably head for a walk around the city.

You live in South West London, what do you love about your neighbourhood? Tell us a bit more about home.

It’s green and quiet, it feels like it’s outside of the city yet it's only 25 minutes back to Victoria. At home, I love my kitchen. It’s open plan, and there’s a lot of light and I love just being able to chill at the breakfast table with David and our daughter: it’s a great space. And I adore my garden, which I couldn’t live without.